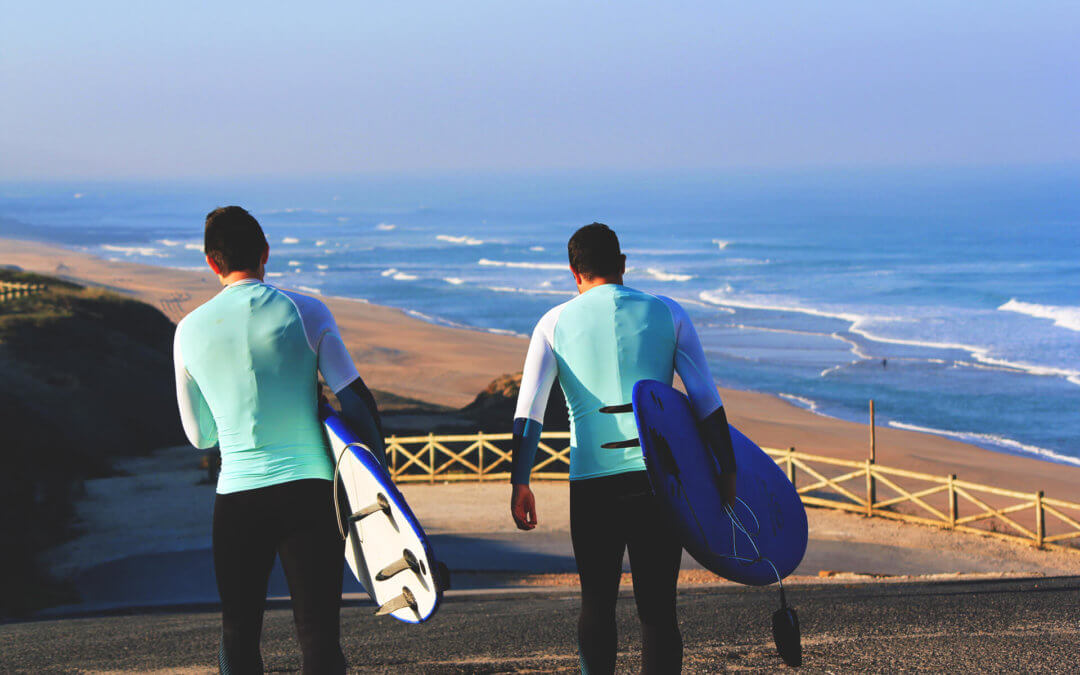 best place to learn how to surf – Praia Azul

The coastline is facing North-west, which means that in the Summer when every elsewhere there’s no waves, here we have some small and nice waves to learn how to surf. There’s waves in Praia Azul all Summer.

Out of the Summer months, if waves get bigger we’re just 30 min from Peniche, a peninsula where we’ll find a nice place to begin your surf experience, away from the crowds.

You probably hate sardines because your mother told you they were good for you. But give them another try now that you’re in Portugal. You’re older and wiser.

What you’ve eaten in the past is very different from the grilled sardines- sardinhas assadas – found during the Portuguese summer. They’re delicious; but the real difference is the experience of going into a small local restaurant and inhaling the fishy, fresh Atlantic Ocean aroma.

And the “Bottom of the Ocean Soup”, an awesome fish and seafood soup made by our local chef. Too hard to describe in several words, easy to describe in one – Amazing!

Europe in the summertime can be a gross, sweaty experience. But not in Portugal, where summer temperatures remain a pleasant 25-27 °C. Autumn and spring bring averages of 16-24 °C, while winter temperatures hover around 15 °C. Even if locals say, “Maaan, it’s chilly today,” you’ll be smiling and sweating tears of pleasure.

Summer is the best time to learn how to surf. Along with warmer temperatures, summer also brings small-to-medium waves. Winter waves are bigger and should be reserved for those with more experience. As a beginner, best to plan your surf trip when the sun is high and the days are long for warm, safe fun.

Of course this is the time when all Europe meets on the Atlantic Coast. However, Praia Azul is of the beaten path, so with less crowds. Even though some of the biggest European surf hubs are just 30min away – Peniche and Ericeira- at praia Azul you can learn how to surf on an idyllic and almost virgin beach.

Some travellers just don’t want to miss a visit to the – in our days – very fashionable Lisbon. Despite they wish at same time, some relaxed beach vacations. At least during the day!:)

You can have the best of both, have your uncrowded surf lesson and quality time at the beach.

Lisbon is just 45 min away and is completely worth to check!

Also the beautiful medieval town of Óbidos is close by!

If you wish to watch one of the big international surf competitions held in Ericeira, Peniche or Nazaré, or just go for a surf trip and party, it’s all in our region.

Speaking of party, you can have some fun party in the town, Santa Cruz. It’s just 5min by car or taxy.

You can learn how to surf and stay a week in a Hotel with swimming pool right at the beach for less than 25 euros a night, when you book surf and accommodation package. You can have surf lessons and you can rent boards, wetsuits, and other essential gear. There are fresh breads, fruits, and cereals for breakfast every morning, and you’ll make friends from all around the world who share your passion for surfing. In five days, you’ll surf over 20 hours and spend less than 300 euros.

Whatever your language situation, Portugal has an answer. If you don’t speak Portuguese, no problem. You can speak English, and locals will understand almost everywhere. If you don’t feel comfortable with English, you can survive on Spanish, too. Luckily, the Portuguese have a good ear for languages. And you can have surf lessons in English, French, Spanish and some basic German.

And have you heard about the biggest wave ever ridden? Nazaré, Portugal. An international big-wave crew, with names like Garry Macnamara, Sebastian Steuder and Andrew Cotton catch 70-100ft monster waves pumping one after another offshore, just a few kilometers from our little beachbreak full of rookies.